UNIVA, the University for all; a Hub of academic culture focusing on contemporary issues

The Lyon Catholic University is committed to ensuring that everyone has the opportunity to broaden their knowledge base, and think outside the box, especially though art. While having a well-rounded education is obviously necessary to understand the complexity of the world we live in, it’s also a driving force behind action and commitment.

If there is an overarching issue today, it is the growing complexity of the world, making it all the harder to understand and deal with. Complexity is a combination of order and disorder, where opposing ways of thinking coexist, branching off in different directions; capable of organising itself, where the end product affects the system that created it: this is what we are told by Edgar Morin, a worldwide well-known sociologist, philosopher and thinker about complexity. It is an unstable, open system, in which the number of factors is not constant, and which is the locus of multiple, variegated interactions, both internal and external. These characteristics apply well to both humans and societies; therefore, they are both complex by nature.

When the world was relatively polarised, with a vast majority of the population living in ignorance, unable to get their voices heard, life was already complex. But it has become even more so, due to digital technologies and facilitated international mobility allowing information to circulate everywhere and enabling most people to express themselves. What’s the immediate consequence? The world has become less and less collectively governable, at least with the tools and concepts that have been used up until now. One of the most dramatic illustrations of this is the issue of climate change, which is no longer a matter of debate. We know for certain that it is going to cause huge environmental, social, economic and political problems. And yet, the world's current governments are incapable of taking the operational measures needed to remedy it.

Culture as a tool for understanding the world

In 1932, in The Edge of the Sword, Charles de Gaulle wrote about leadership: “The true school is the school of general knowledge. Having general knowledge brings order to our thought processes, enabling us to distinguish between what’s important and what’s not, (…) to rise to the degree where the whole appears unaffected by nuances”. His words perhaps also apply to our understanding of complexity. UNIVA seeks to build understanding by offering more than 2,200 people every year the possibility of deepening their understanding of a variety of subjects, with high intellectual standards. 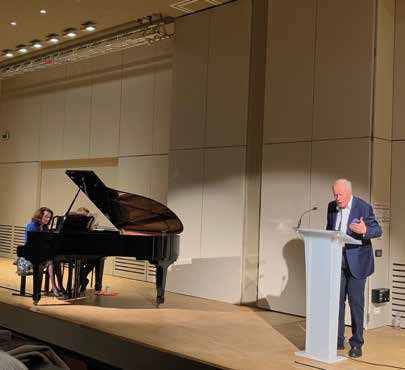 If we continue with our earlier example of climate change, UNIVA offers a course taught by a PhD in philosophy, whose thesis is entitled “Pour une ontologie de l’écologie. Penser les fondements philosophiques de la conversion écologique (For an Ontology of Ecology: Exploring the Philosophical Foundations of the Ecological Conversion) on what the world's great spiritual traditions have to say about man’s relationship with the planet. There is no doubt that Christianity and Buddhism, for example, do not address the problem of the future of humanity and the survival of the planetary ecosystem in the same way. Due to the extreme complexity and gravity of this problem, approaches that seek to reconcile the visions of all sources of wisdom are the only ones capable of achieving results. This is all the more true because complexity is better tackled within a constructivist paradigm, resulting in a collaboratively created response to the issues encountered, rather than within a framework in which only experts' voices are heard.

"…And it serves as a driver of action and commitment.”

The first advantage of general knowledge is that it helps us understand complexity. But there is another advantage that UNIVA makes especially clear: an increase in general knowledge is a driver of action, of commitment and even of excellence in action. “Read the newspaper; you’ll dance better,” Maurice Béjart (a well-known French choregrah-dancer) said to one of his students.

“If you’ve always had a curious mind, and you’re not hyper-focused on your career any more, you can cultivate yourself and learn lots of exciting things,” says Charles, who has been a volunteer at UNIVA for many years. And he continues: “When you acquire this knowledge, on the one hand you really want to share it, and on the other hand, you really want to inspire other people to acquire it too.” This means making a commitment to spreading knowledge in your own way, with all the rigour that an engineer might apply to the task, and with the benevolence and attention to others that is the hallmark of UNIVA.

WHEN CULTURE LEADS TO ACTION

Thérèse, another volunteer at UNIVA, drives the point home and, although she is a former French teacher, she transforms it in into something of a mathematical theorem that can be illustrated this way: 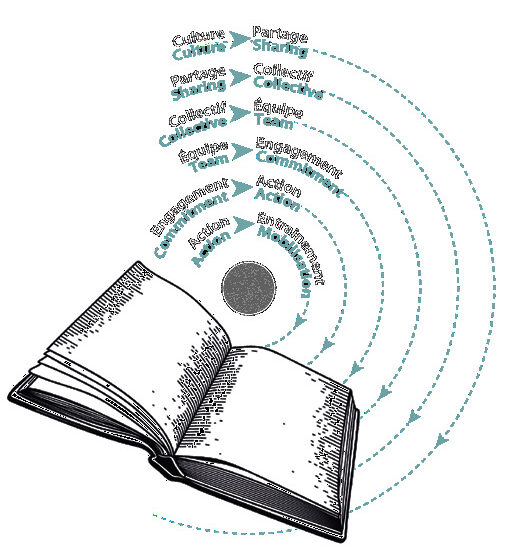 OVER 2 200 STUDENTS ENROLLED AT UNIVA

Since 1975, UNIVA at the Lyon Catholic University has been offering the general public about 35 courses, sometimes including study trips, and about 20 workshops and visits, with no age limits or prerequisites. The courses consist of six or nine 2-hour sessions, given by a single teacher in a single place (UCLy Campus, Lyon 2nd district). 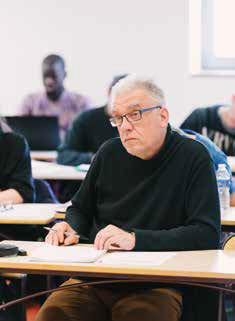 The courses span various areas of general knowledge: civilisations and religions, geopolitics and economics, history, literature, art, philosophy, psychology and science, and are regularly updated. Over 2,200 people enrol every year. On average, they participate in two or three activities each, e.g. courses, workshops, visits and trips.

Campus Life
UCLy welcomes the Art world
By bringing art into the confines of the university, and by including cultural activities in the curricula, UCLy intends to develop the creativity, open-mindedness and listening capacities of its students