During the 2018-2019 academic year, the “Memory, Cultures and Interculturality” Chair organised two high-profile conferences on the themes of terrorism in the Sahel and reconstructing peace in the Democratic Republic of the Congo.

Terrorism in the Sahel: a crisis of security and governance

On 20 and 21 March 2019, a symposium was held on the theme of “The French-speaking world confronted with the challenges of terrorism: the case of the Sahel region in Africa”. The event took place on the International Day of the French Language 2019, under the distinguished patronage of the Honourable Mrs Louise Mushikiwabo, Secretary-General of the International Organisation of the Francophonie (OIF).

The symposium was preceded by a kick-off conference called “Crisis Management in French-speaking Africa.”

This was led by His Excellency Mr Pierre Buyoya, diplomat, President of the Republic of Burundi (from 1987 to 1993, and then from 1996 to 2003), High Representative for Mali and the Sahel of the African Union (AU), Head of Mission of the AU for the Sahel and Mali (Misahel). 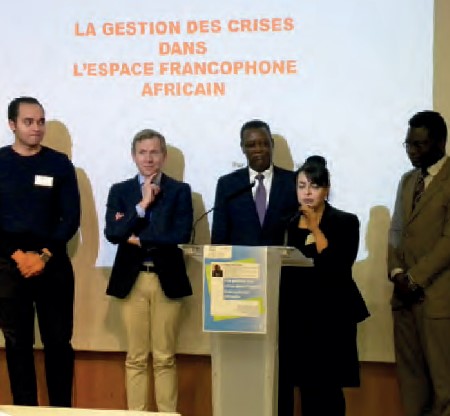 Several civilian and military experts came from Africa, North America and Europe to participate in this academic event. Major issues were addressed, concerning counterterrorism in the countries of the Sahel Region in Africa, by examining the topic from several perspectives: the security crisis, governance and development.

The security crisis: a crucial issue to be solved

The problem of terrorism in the Sahel countries is first and foremost a security issue. Resolving this problem is a precondition for addressing matters peace, good governance, development, etc. The heads of state of the region have fully understood that this scourge represents a threat to the peace and security of the entire African continent and of countries far beyond. Thus, despite the other urgent matters to which these governments must respond, strategies are being developed and deployed according to a long-term vision, in particular in the framework of the G5 Sahel.

"A symposium to offer a rational reading, analysis and comprehension of the phenomenon of terrorism."

The issue of governance and the rule of law

The fight against terrorism poses a challenge for the rule of law, under which human rights and fundamental freedoms are guaranteed. The first challenge is that terrorism represents an egregious violation of the fundamental freedoms of the people the State is responsible for protecting. But, at the same time, due to the scope and gravity of terrorism, the legitimate actions of governments aiming to eradicate it run the risk of infringing on human rights and freedoms.

And thus, a question is raised: how can the government take legitimate action against terrorism, without losing sight of the basic requirements of human rights and the rule of law?

The objective is to achieve development that is both fair and sustainable. This constitutes one of the most promising approaches for structural, effective prevention of terrorism and other forms of organised crime. To speak of fair and sustainable development in the Sahel implies taking into consideration the desires of the people in this region, particularly in terms of meeting their basic needs for education, healthcare, food safety, employment, wellbeing, etc., with special attention to young people.

Aware of the significant challenges and profound aspirations of the people in this geopolitical, cultural and French linguistic space, our UNESCO Chair, established in 2007, has long demonstrated great interest in these questions. This was the motivation behind a number of academic events, including an international
seminar on the theme: “The French-speaking world facing the challenge of preserving human rights, international peace and security (Lyon, 10 July 2018).

Offering a rational analysis of terrorism

One of the main objectives of the symposium was to raise the awareness of young researchers about the stakes of today’s globalisation, world governance and multilateralism. Priority was given to mobilising the Circle of Doctoral Students (CERDOC), one of the specialised structures of our UNESCO Chair, with members mainly from the French-speaking world.

In keeping with its mission and vision as a university research institution, the Chair’s objective was to offer a rational reading, analysis and comprehension of the phenomenon of terrorism, through the mission entrusted to it and the vision it embraces. This approach, bringing together academics, people working in the field, civilian and military experts and others, provides a forum where the issue of terrorism can be addressed in all its complexity, both in terms of its spread and in terms of concerted governmental efforts to eradicate it.

This approach also seeks to de-essentialize the debate and refute the argument that terrorism is precisely the expression of the “clash of civilisations” theorised two decades ago by Samuel Huntington, which is still relevant today.

The international symposium was intended not only for master’s students, including those from the Lyon Human Rights Institute (IDHL) and the doctoral students from the CERDOC, but also for law students and the legal professions (judges, lawyers, law enforcement) and people preparing for civil service exams. For our Chair, the aims were to contribute to advancing knowledge about the phenomenon of terrorism, drawing attention to the French-speaking countries of the Sahel region and to promote the Chair’s initiatives for peace and security.

Another highlight of the 2018-2019 year for the Chair: the presence of Dr Denis Mukwege (Nobel Peace Prize 2018) on 30 March 2019, in the framework of the Chair’s public conferences. This event, which drew a very diverse audience of 733 people, was entitled “The challenges of impunity in the (re) construction of peace in the Democratic Republic of Congo (DRC)”. 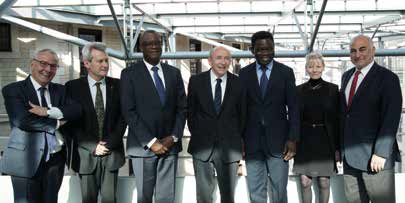 The conference was attended by the traditional audience of the UNESCO Chair, including students from various universities in Lyon and the Auvergne-Rhône-Alpes Region, but there were also members of civil society, of the legal professions, journalists, consular representatives, and local elected officials, including
the Mayor of Lyon, Gérard Collomb, and Members of the French Parliament. The Congolese diaspora was also present, having travelled from various parts of France and even from bordering countries, such as Switzerland, Belgium and Italy.

"Dr Denis Mukwege’s conference was attended by a diverse audience of more than 700 people."

International
ICM: a boost for International Mobility
Thanks to the Erasmus+ International Credit Mobility (ICM) programme, students, teachers and staff can participate in exchanges with countries outside of Europe. UCLy took advantage of this opportunity recently with two partner universities, in Lebanon and Georgia

Non classifié(e)
Let's welcome the World!
For several years now, UCLy has been doing its very best to make sure that the high-quality welcome offered to students from all over the world remains a priority. By doing so, it intends to cultivate its distinctiveness, based on the ongoing support of each and every student, especially those coming from abroad